There are a variety of ways to gain a better understanding of the unique strengths and challenges that exist among Indiana’s 92 counties. One of the best ways to do so is to explore data on the basis of the “geographic classification” of counties. Terms such as metropolitan/nonmetropolitan status or urban/rural designation are two commonly used approaches for distinguishing counties on the basis of their geographic characteristics.

While there are several classifications that have been developed by researchers and federal agencies over the years, three represent important components of the Rural Indiana Stats site. We describe each of these typologies in greater depth below. 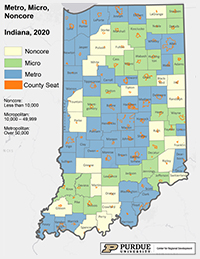 The Noncore label is assigned to nonmetropolitan counties that fail to meet the micropolitan definition. As such, they are counties that have no city, town or urban cluster of 10,000 residents or more. Thus, cities and towns that are part of noncore counties are typically small in population size, oftentimes just a few thousand people or less.

The distribution of Indiana counties by the metropolitan/nonmetropolitan area classification is as follows (based on 2013 data):

Please note that some reports you may read will opt not to subdivide the nonmetropolitan designation into its micropolitan and noncore categories, preferring to aggregate these two groupings into one nonmetropolitan category. 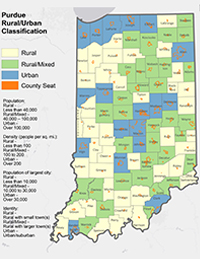 A team of researchers and practitioners from Purdue University developed a new typology in 2013 that was designed to capture the unique features of Indiana’s 92 counties. The classification system began by incorporating three core elements: (1) population size; (2) population density; and (3) the size of the largest city or town in the county. Next, the team added a subjective measure, namely, the “identity” that people had of their county. For example, did they perceive their county as being largely rural in nature, as more urban, or as some combination of both?

Next, the team developed specific thresholds for determining how each county would be classified. These are described in more depth in Table 1. Based upon these thresholds, they assigned the state’s 92 counties into one of three groupings: Rural, Rural/Mixed and Urban. The number of counties falling into each grouping is as follows:

To learn more about this classification system, go to https://www.extension.purdue.edu/extmedia/EC/EC-766-W.pdf. 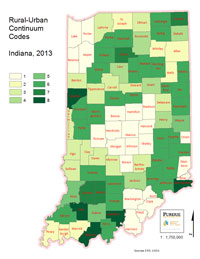 A third classification system commonly used, especially by researchers and policy analysts, is the Rural-Urban Continuum Codes. This typology was developed by the Economic Research Service, one of the key research arms of the U.S. Department of Agriculture. The Rural-Urban Continuum Codes represent one of the most in-depth typologies that can be used to differentiate counties in Indiana and across the United States.

The table to the left is the classification of Indiana counties by the Rural-Urban Continuum Codes.

Other Geographic Classifications of Interest

Although the Rural Indiana Stats provides users with a variety of county-based information on by each of the three geographic classifications highlighted above, there are other useful typologies that may be worth examining. We briefly described these in this section of the website.

For a number of years, the major building block for determining the rural or urban status of areas was linked to size of a place. Specifically, places having a population of 2,500 persons or more were designated “urban.” Places were defined as incorporated cities, villages, boroughs, or towns, or unincorporated areas having features that the Census Bureau would view as consistent with places. Rural, on the other hand, applied to places of less 2,500 persons or areas located outside of incorporated or census defined places.

In 2002, the U.S. Census Bureau embraced a new way for defining urban and rural areas and applied this new typology to its 2000 decennial census (i.e., the survey that all households in the U.S. were required to complete every ten years). As such, the basis for classifying urban and rural is now tied to census blocks rather than places. Census blocks reflect the smallest geographic units established by the Census Bureau (Missouri Census Data Center, 2006). Urban refers to all territory, population and housing units located within an Urbanized Area (UA) or Urban Cluster (UC). Both UA and UC boundaries include densely settled territories consisting of (a) core census block groups or blocks having a population density of 1,000 persons or more per square mile, and (b) surrounding census blocks that have an overall population density of at least 500 people per square mile (U.S. Census Bureau, 2008). In most cases, UAs include areas having a nucleus of 50,000 persons or more, while UCs represent areas having a minimum of 2,500 but less than 50,000 persons. As for rural, it is defined as the territory, population, and housing located outside of a UA and UC. In most cases, it includes populations of less than 2,500 persons. 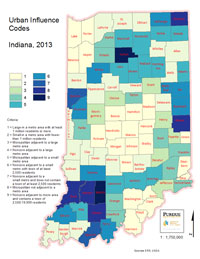 Developed by the Economic Research Service/USDA, this classification is the result of research that shows that a variety of economic opportunities accrue to places as a result of their population size and their access to larger economies. As ERS notes, larger economies serve as a conduit for smaller economies by connecting them to national and global markets. Furthermore, these larger areas function as the hubs for information, communication, trade and finance. The starting point for the Urban Influence Codes is the metro and nonmetro (micropolitan and noncore) county designations. These are then subdivided into two metro and 10 nonmetro categories. This generates a detailed 12-part county classification system. 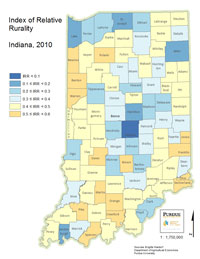 Unlike other geographic classifications highlighted in this website, the Index of Relative Rurality does not classify counties on the basis of certain thresholds that they meet (such as meeting the attributes associated with metropolitan or nonmetropolitan counties). Rather, it represents a continuous measure of rurality that can range in scores from “0” to “1”. A score of “0” is associated with the most urban places while a score of “1” refers to places having the highest level of rurality. Important work on the index has been undertaken by Brigitte Waldorf with the Purdue Department of Agricultural Economics. A nice overview of the index was highlighted in a 2007 publication she produced for the Purdue Center for Regional Development (especially pages 10-12). It can be accessed here.

What the results indicate is that several Indiana counties (54 counties) have moderate levels of rurality (those in the 0.4 to 0.6 range) while 20 counties tend to be far more urban given their lower scores on the rural index (that is, those with a score of 0.3 or lower). The remaining 18 counties contain a good mix of urban and rural areas (IRR scores between 0.3 and .04). 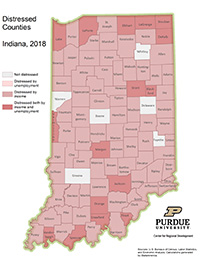 The Economic Development Administration offers a variety of grant opportunities to neighborhoods, counties and multi-county regions across the nation having in place sound comprehensive economic development strategies (or comparable plans) in place. Many of EDA investments, however, are targeted to areas that are deemed to be economically distressed.

A third criteria that EDA may opt to use to determine distress is what is labeled a “special need.” Such special needs may be linked to major economic events, such as sizable job losses in coal-dependent areas of the U.S., declines in defense-related jobs due to base realignment and closure or sizable cutbacks in defense contracting activities by the Department of Defense, or major catastrophic events such as natural disasters.

Another valuable source of information on distress can be found at the following StatsAmerica site http://www.statsamerica.org/distress/distress.aspx